Detection of a potential or confirmed breach of the property perimeter provides time for police or guard forces to intercept a threat before the loss of property or harm to staff.  Facilities with perimeter detection in place range from remote petrochemical or cellular sites to vehicle processing or storage facilities to critical infrastructure.

A site survey is necessary in order to properly evaluate the perimeter. Below is a link to Site Survey: Perimeter Detection to get you started down the path to an effective perimeter detection solution. The site survey will provide an opportunity for all stakeholders to set their expectations and will narrow down the best solution for the application. 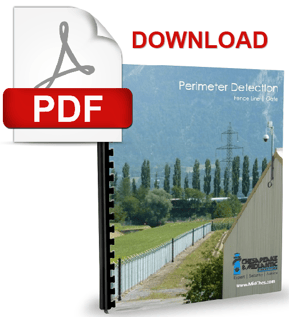 Dual technology sensors feature a 15 m x 12 m (50 ft x 40 ft) detection pattern, and are specified for the protection of specific assets, strategic areas or as a gap-filler in conjunction with other detection systems such as fence or buried cable perimeter intrusion detection system, microwave links, or transceivers. 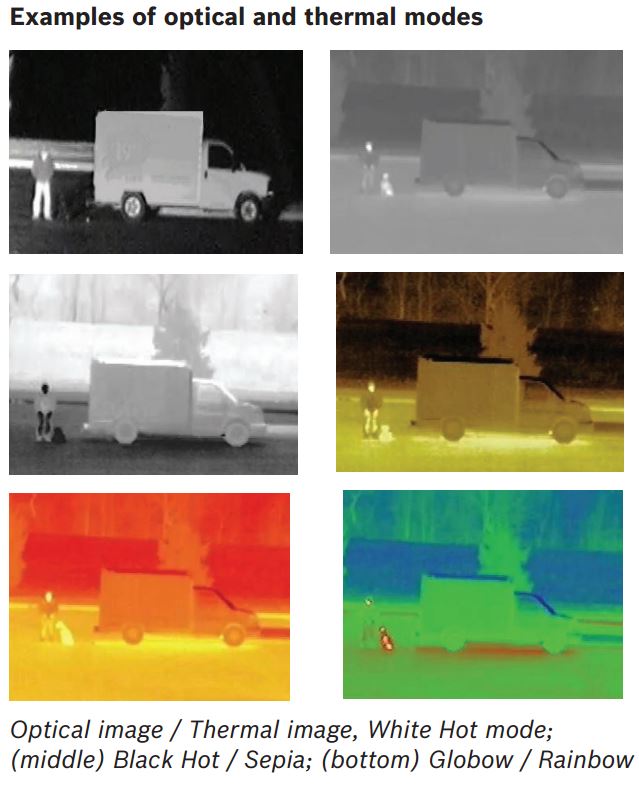 Thermal imaging cameras provide the opportunity to detect a human or other heat signature producing body at or before a perimeter. This technology allows monitoring stations to eliminate the possibility of cloaking by using shrubbery or camouflage clothing. Cameras that can see visible light are often used to verify a heat signature detected by a thermal camera since the resolution of a thermal imager is much lower than that of today’s high definition visible imagers. In many cases, lights will be turned on at the alarm site. Another option to provide light for the visible camera imager is to utilize infrared illumination which allows the camera to see a monochrome image of the scene with no visible light present.

Thermal imaging cameras are available in many form factors.  Most often a fixed camera is used, however, there are high end solutions which allow for pan tile zoom functionality.  At the highest end of the camera capability range are thermal cameras with a second visible light sensor.  This allows the operator to quickly switch between the thermal image and the visible image to quickly identify the potential threat.

Intelligent video analytics (IVA) are often deployed in conjunction with thermal camera sensors.  The use of IVA allows for the facility owner to determine more specifically when a violation is occurring since the image from the sensor is not as detailed as that of a visible camera imager.

Different types of cable can be used to detect the vibration and shock of walking. These cables are buried under the ground, usually at or near a fence on the “secure side” in order to eliminate unwanted detection of animals or patrol officers. The area where these cables are buried must be prepared most simply by digging a shallow, narrow trench of a foot or so. Some systems require more excavation and specific materials to cover the cable.

In outdoor environments, a cable can be applied to the fence fabric in order to sense the act of climbing or cutting a fence to gain access. The cable is attached to the fence using a simple cable tie in such a manner that vibration can be detected.  In order to reduce nuisance alarms, sophisticated software monitors the vibrations and looks for uniform vibration across a large section of the fence.  This allows the system to discern wind vibration from localized breach attempts.

The system collects information of intrusion by climbing, cutting or tearing of the support. In order to detect intrusion attempt, a detector cable is installed on the support to detect every vibration due to cutting climbing or tearing. The advantage of this kind of technology compared to a detection with microphonic cable, is the simplification of installation and maintenance process.

Microwave sensors generate an electromagnetic (RF) field between transmitter and receiver, creating an invisible volumetric detection zone. When an intruder enters the detection zone, changes to the field are registered and an alarm occurs.

Camera systems can be deployed that use the information they "see" to alert authorities of very specific behavior violations such as line crossing in a specific direction as well as dozens of additional behaviors.

In the video below, we discuss the use video analytics and other systems to detect an intrusion into a secure area during a partner demonstration.

Perimeter detection technology can significantly reduce nuisance alarms, however the need for alarm verification still exists. For this reason, most sites deploy force protection to an alarm site after verification of the alarm using a visible camera system.  Most often this is accomplished using a pan tilt zoom camera system.  PTZ cameras allow an operator to investigate a specific alarm zone along the perimeter without having to leave the command desk.  By assessing the threat in advance, proper response can be deployed.  The response may be a single guard or police officer who responds from a different site or from within the facility. These alarms may also be monitored by a 3rd party monitoring service located at a central monitoring station.  The central monitoring station will then assess the alarm and activate an appropriate response.

In this video we see how a video management system can receive alarms from other systems, in this case a pull-station alarm, to cause an alert for an officer to react to instantly.