When making a choice for your intrusion detection system (IDS) application, several factors need to be considered:

Points are connections to the intrusion detection control panel that are commonly connected to windows, doors, motion detectors, etc. These sensors can be bundled together on one connection point or can be connected on separate points for very specific identification when an alarm occurs.

Areas are regions within a building or space. These regions may be rooms, areas, or even data closets or equipment racks. One intrusion detection system control panel can control multiple areas simultaneously, thus allowing an organization to secure specific parts of their facility independently.

Quantities and Locations of Sensors

A door alarm sensor is a magnetic device which triggers an intrusion detection alarm control panel when a door is open or closed. It comes in two parts, a magnet and a switch. The magnet is secured to the door, and the switch is connected to a wire running back to the control panel.

Using wireless technology can be advantageous when deploying alarm sensors in places where getting a wire can be difficult or simply impossible.

Common considerations and applications for motion detector selection include:

Wall mounted motion detectors are normally used to monitor the interior spaces of small rooms. Mounting a motion detector in the corner of a room allows you to take advantage of the wedge-shaped detection pattern put out by a typical motion detector to get the maximum useful coverage.

Building codes are written to help balance security, safety, and standard operations . That is, the ability of building owners to keep unauthorized people out while enabling people within the building to exit quickly and easily in case of a fire.

Many door designs use mechanical means to open a door in case of emergency. However, this can be difficult to accomplish with a magnetic lock (maglock) as part of the design. That’s why life safety codes and Authorities Having Jurisdiction (AHJs) will require at least one, and sometimes two, methods to guarantee that building occupants can evacuate quickly in case of emergency. This concept, making it easy to leave a building in case of emergency, is called free egress.

Seismic detectors look for vibration like that caused by a saw or drill. Lots of people rely on big, heavy, metal boxes to keep their valuables in. Of course, we’re talking about safes and vaults. The problem is that safes don’t keep people out, it just slows them down.

For extremely high value targets, you’ll sometimes get intruders tunneling through walls or floors to get to a safe. An alarm and a lock on a door doesn’t help if the bad guy doesn’t use the door. Once they’re in the room with the safe, they can cut, drill, blast, or just remove the safe to work on it somewhere else.

Using outdoor-specific technology can be advantageous in an effort to push perimeter detection farther from a building.

Multiple keypads can be used at a single facility. This is the common user interface for an intrusion detection system. Location of keypads as well as functionality and aesthetics of keypads is important to consider.

Custom functions can make daily operations more efficient. They can also speed up processes that would otherwise need to be done manually during an emergency situation such as an emergency alert or lock down at a school or business. These functions can be considered when evaluating an organization's emergency response plan.

Using a 3rd party central station to monitor intrusion detection alarms can ensure that all alarms are reacted to appropriately and that the business leadership, police, and other agencies respond quickly.

Bosch G series panels including the B8512G and B9512G are UL listed for commercial fire applications. Until recently, using a single alarm control panel was subject to approval by the local authority having jurisdiction (AHJ), which meant in practice that very few installations used the same panel for fire and intrusion. The code was changed in the 2007 NFPA update, and as a result, an increasing number of new installations are now combo installations.

There's an innovative way to add intelligence of your intrusion detection alarm system that allows you to detect very specific behaviors well before or much more specifically than any motion detector or door contact can. This is one of the most unique, no-additional-license-required features of Bosch intrusion alarm control panels, and probably one of the least utilized features.

The Differences Between G Series and B Series

More about B Series Alarm Panels 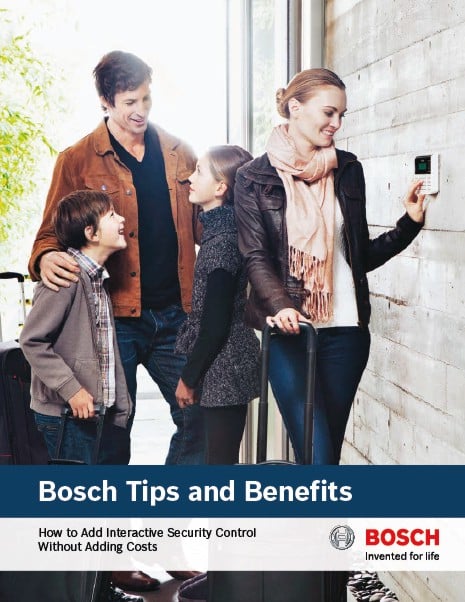 Tips for IT pro's about intrusion alarms